For as long as I’ve been in the macrophile world—so that’s pre-electricity, more or less—there’s been a divide between “gentle giant” and “fuck yeah rampage” types. Occasionally this gets expressed with varying degrees of frustration in tweets, story comments, out-of-character rants, what have you; I’ve seen more of it recently, but it’s a perennial favorite grouse.

The original Giants’ Club tried to split the difference: rampage here, but please don’t rampage there; assume that littles are in danger when they enter the Club, but remember it’s a social space, not a murder den; make sure you have OOC consent for anything extreme you plan to do IC. Toeing the line mostly worked, but there was no way to make everyone happy. Folks closer to either end of the gentle/rampage spectrum felt I was biased against them (and boy, did I hear about it).

Yet despite those who insist this is a bright, hard line, the gentle/rough divide gets pretty permeable in practice. Most people who are fans of rampaging aren’t fans of only rampaging—we give our giant animal-people personalities and romances. Conversely, I know more than a few folks who dislike the rampaging stereotype who nonetheless get awfully interested in pictures of giants crushing cars and knocking over buildings.

For me, this mix is…complicated. I find implacable, inescapable predators pretty sexy, and I joke about planet-eating mice being hot because I think they’re frikkin’ hot. I used to love playing rampaging characters, and I still write about them (hello, vignette mouse). Yet I don’t like meanness and cruelty, and over the years I’ve become increasingly wary of glamorizing it in my stories. Stomping through a city of helpless little people is pretty high up on the “mean and cruel” scale. So…eh?

Let me step back and go fiction instructor at you for a moment, and contrast “villain” with “antagonist.” A villain is, well, villainous—they have evil motives and intent. (They may have what they believe is a noble end in mind, but are willing to commit evil acts to get there.) An antagonist is someone whose goals are in opposition to the protagonist’s. Usually, the antagonist in a story is a villain and the protagonist is a hero, but not always. A villain is a character type; an antagonist is a plot role.

Taking this back around to macrophile topics: are all rampaging giants villains? Well, here’s how I look at it: 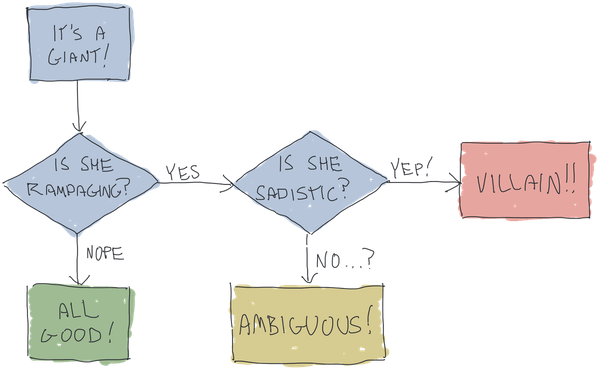 It’s hard (although not impossible) to make a rampaging giant the hero, but that doesn’t automatically make them a villain. I’d argue sadism is the key differentiator. For the “die before me, you helpless bugs” type of giant, their central thrill isn’t the size, the power, or even the destruction. It’s the death. The people underfoot aren’t collateral damage, they’re the targets.

Now, I’m sure someone reading this feels that this is a facile or unfair reading of sadism. How dare you say Mr. Grey is a villain! But I’m not intending a moral judgement of you, the reader. I’m intending one of the giant. If he’s a sexy, sexy villain that you’re daydreaming of being victimized by, look, I get it. (See: planet-eating mouse fetish.) I’m just saying that doesn’t make him not a villain. Also, Christian Grey is a dick and you know it.

Anyway, I admit that villains usually aren’t too interesting to me. But I have endless love for that “ambiguous” outcome. Miss Flint from “The Perfect Secretary” is one of my relatively rare anti-heroes. Arilin goes from a villain in “Cheating at Solitaire” to a vigilante rampager in “Teacher’s Pet”; the story consciously questions whether you can be a monster for good. And while Sibry from “The Great Game” is the antagonist, there’s never a point where she’s sadistically taunting victims, and what’s going on isn’t what it first appears. She may well be a villain, but she’s a complicated one.

I could go on for a while. Nearly all my giants fall into the “not 100% pure” category; I’ve described Kailani from Goddess as terminally sweet, and she is—but if she thought you were an existential threat to her, her loved ones, or her tribe, God help you. Even Autumn, the goth bunny giantess from the Patreon serial, has wondered what it’s like to swallow someone. She’d never do that to someone who couldn’t come back, but with magic…?

It’s fine to have gentle giants. It’s also fine to have rampagey giants. No matter your preference, your love is valid. For my part, most of my giants will stay camped out somewhere along the spectrum, but not at either end. Gentle, but not always. Rampagers, but not always. Maybe more heroic, maybe more villainous. Complicated. That’s what makes them come alive for me.